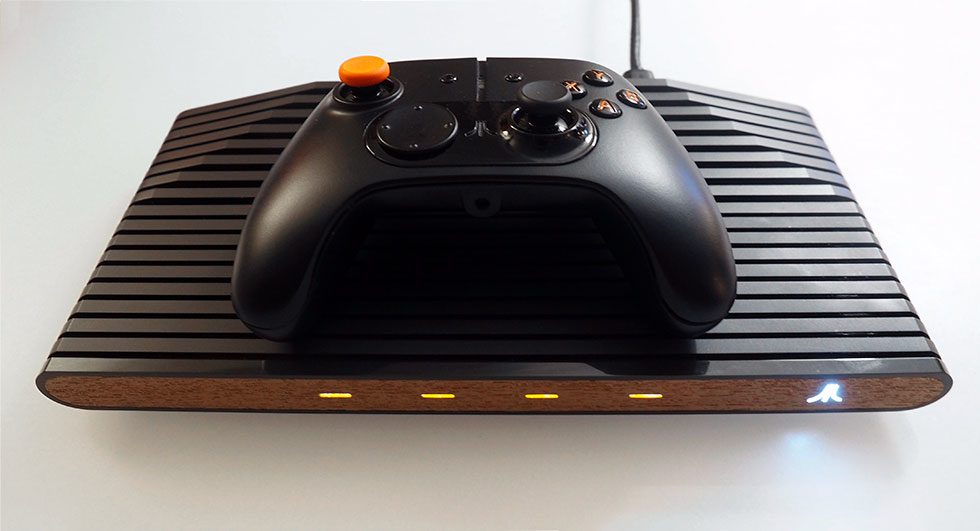 20 years on and Atari the makers of one of the first home consoles to hit the selfs ,will be back in the video game market .The console titled Ataribox has only been teased at E3 and the company is being quite vague at moment.

The information i have gathered so far is that its clearly inspired by the classic wood effect found on the Atari 2600, which features ribbed lines, a raised back, and a front panel that can either be glass or wood with a indicator light that glows through these materials. Some features that have been mentioned is that it will include SD card support, a HDMI port, and four USB ports on the Ataribox. Two versions of the Ataribox have been announced and personally i think the concept design is looking flawless and still carries that great unique Atari style . One will be in wood, and one in black / red.

Atari released its first console in 1977, the Atari 2600, originally called the Atari VCS. The device was controlled by a joystick and one button and is considered one of the first devices to hit the home console market and be popularise playing games using different cartridges that could be switched in and out.

Around 30 million of the original consoles were sold, followed by the Atari 5200 and 7800. The Atari Jaguar was released in 1993 but suffered under direct competition Sega ,Sony and Nintendo

The Ataribox is the latest device to join the revival in retro gaming in recent years following the success of Nintendo’s re-launched NES Mini in 2016. Nintendo is now planning to release an SNES Mini gaming console in September, a new version of its classic 1990s device.

The atrai 2600 was just before my time and it i personally found that it weren’t that well revived over here like over in the US . I found older people were more persuade with units like the Sinclair , Commodore ,Dragon 64 and Amiga. The console was also in the same generation as the big video game crash with a lot a titles brought to it that just weren’t that good at all , bagging a lot of bad titles . Saying that it doesn’t mean that there weren’t any good games on there or a bad system at all  .I personally own a black Atari 2600 Jr which is one of my favourite console designs to this date . The console i own has been composite modded to hook up straight to a CRT TV with an arcade style controller with micro switches making it a great arcade style feel. For me this most preferred way of playing these classic Titles. Games i hope that will be brought over are as follows :

With the the impact to gaming history and its classic released titles .This will be a great pick up for any gamers out there , old and new . No released date has been confirmed but I will keep this post updated once the information has been released.