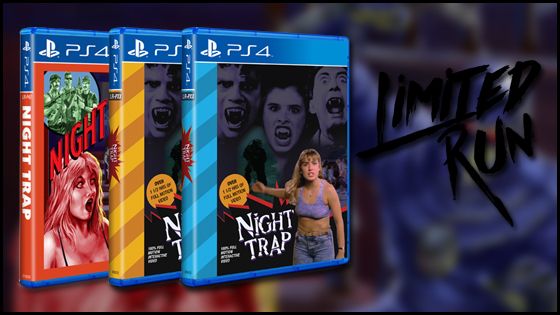 Welcome to Night Trap the cult classic game for being infamously bad. This  full-motion video game was released back in 1992 for SEGA CD .

Night Trap was ultimately later ported to a wide range platforms that brought with it an impact to the gaming industry . By holding one of the first mayor controversy over the game’s violent and “sexual” content . This then led to Sega temporarily pulling it from store shelves. The game was cited as one of the reasons for the creation of the ESRB in 1994.
View the official trailer here.

Now the game is back surprising a lot of us gamers again with its 25th anniversary re-release on PlayStation 4 and Xbox One this spring. Personally i think this is a great collectors piece and due to the rarity of the original being pulled of the shelves . We can now get our hands on this unique game that impacted the history of video games .

Limited Run Games is now handling the physical release, with three different covers. each referencing  each of the U.S. Sega CD versions of the game. The re-release has been rated Teen for violence, blood and suggestive themes.
no release date has yet been confirmed or price . Head over to limitedrungames.com  to track updated info .