This year is truly about the nostalgia factor when it comes to gaming. With Nintendo, Sega , Atari and SNK releasing a micro console by 2019. Sony PlayStation are now jumping on bored the micro console money train. Nearly 25 years after making its original release the PlayStation is coming back.

Upon release the console was a groundbreaking machine. Featuring a 32bit processor and (at the time) powerful graphics hardware,that focused on 3D polygonal visuals and moving on from the 2D generation predecessors . The original unit sold more than 100m units worldwide.Making it one of the most sold units ever.

The console comes with a virtual memory card allowing players to save their progress without the use of the little grey, whopping 1mb memory cards. So now no leaving the console on all the time encase you forget one. Also it comes with one micro usb a hdmi cable and two USB Controllers. No usb power unit is included.

The full list of games hasn’t been announced yet with more being revealed over the next couple of months but the confirmed titles are – Final Fantasy VII , Jumping Flash R4 ,Ridge Racer Type 4 ,Tekken 3 ,Wild Arms

Sony have officially announced the remaining 15 titles coming to the PlayStation mini . Here is  the pictures taken direct from its source . 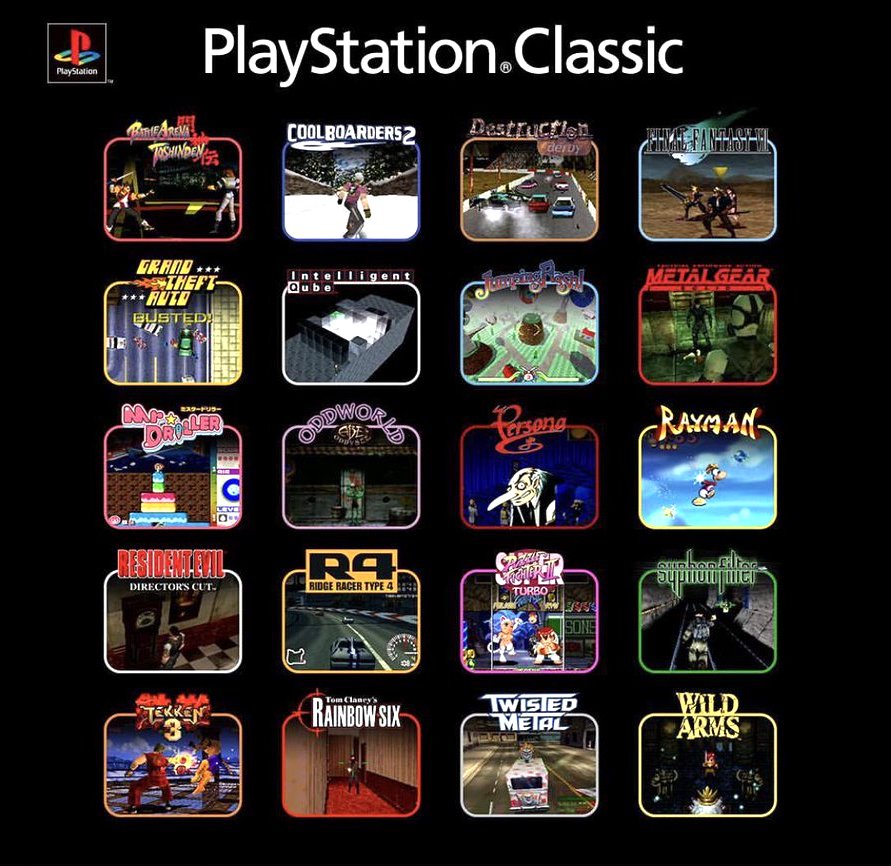 Now as previously stated before Sony may go a head and change a few of these titles for releases in different region . This i believe is for the north American release but it have not been stated yet that they will go head with changing some up.

Personally for me and a lot like other people i am existed for a lot of the titles but not for all. The ones i am not too excited about are , Intelligent Qube , Rainbow six , Resident evil DC and Syphon filter . For the younger gamer i can understand that video games in general have came a long way and may not appeal to them.

This console is more for the nostalgia factor and convenience. The one thing i can encourage the younger ordinance is to learn the history of where a lot of these great titles came from and the  game play factor is still there. For example Super Puzzle fighter has great gameplay that  not need to depend on the graphics to relay playable captivity. With all theses great titles on a small unit with the best video output souse is great this is one to not miss up on.

Comment bellow and tell me what are your favourite titles you are looking forward to.